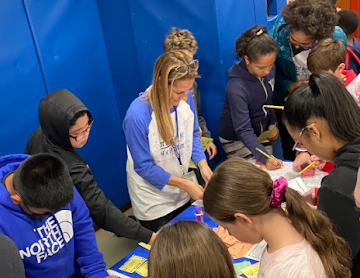 Math Night at Ward Adds Up to Fun

Family Fun Math Night filled William B. Ward Elementary School April 20 with students from kindergarten through fifth grade, their families, and over 40 teachers eager to blend important lessons with excitement.

Thirty-six math stations were set up throughout the Cafeteria and Gymnasium for students to engage with teachers, friends, and their families. An Estimation Jar contest, Attendance Graph, Dreambox station, Parent and English as a Second Language Resources, and a Bull’s-eye Game demonstration by Jorge Moore from Tutoring Solutions added more excitement. The event also featured music, prizes, and food from Deanna’s Pizzeria and SolBol.

Students’ math passports were stamped at each station to mark their participation. Completed passports were traded for a raffle ticket to win a grand prize awarded to two students per grade. The grade prizes were baskets filled with math games, books, and manipulatives.

“The amount of families who attended, smiles on students' faces, and seeing kids having so much fun working on math problems and games were truly priceless,” said Math Coach Nicole Conlisk. “It honestly felt like the first normal event in years. Everyone was happy: happy to be out, happy to see friends, happy to be in the school, and so happy doing math! The energy was amazing!”

“I think Math Night was really fun,” said fifth-grader Hayden Turnbull. “I enjoyed playing all the games. I got to see all my friends.”

First-graders Isabella Senerchia and Zayne Pjetrovic said, “Math Night was nice because there were math games … and there was also pizza!” They also liked Math Night because “Mrs. Jones and other teachers were there. There were a lot of fun games!” 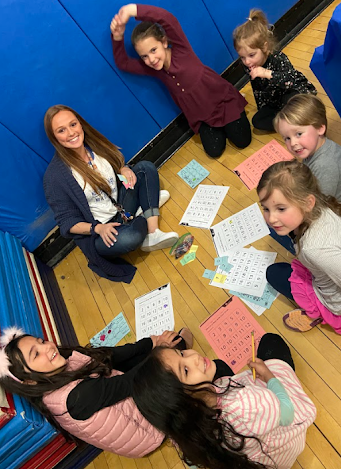